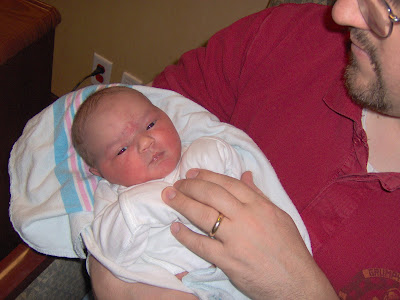 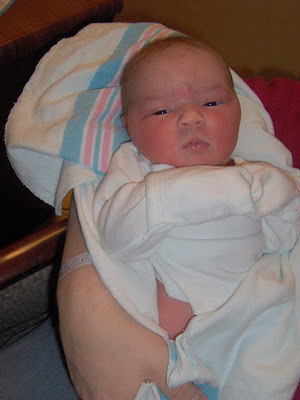 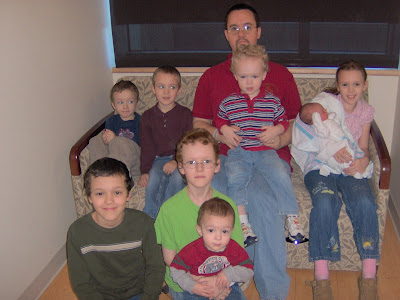 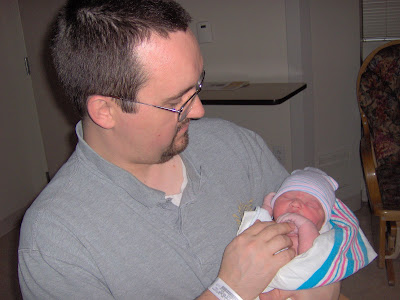 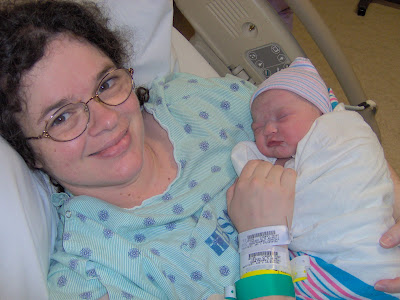 Last Wednesday we finally got to meet Liberty Rose... not that she was late or anything, it's just that I had been in labor, literally, not just "felt like" I was in labor, for the entire month of October. As in, we had stuff ready for delivery at home, in the car, or for the quick trip to the hospital from the end of September on, and with good reason.

There were at least 6 separate evenings/afternoons where we thought we were going to the hospital and several nights where I would be ready to wake Tom up to get ready to leave only to have labor stop. And there was progress, but obviously no baby. Every week our doctor would say, I don't think we'll see you next week... haha.

We scheduled an induction for October 23rd, thinking we were ready, only to have illness hit our family with a vengeance... mine going into sinus and ear infections and who knows what else. It was not the flu, but everyone except Tom got very ill with fever, cough, and congestion. It took me a week and a half to start feeling decent again (we cancelled the induction). Baby Liberty stayed put and we were glad she did. We even made it through Halloween without a baby.

The next Monday we again scheduled an induction for Friday, November 6th. Wednesday November 4th I was having a rough afternoon (this was nothing new, happened several times a week all through October lol) and told Tom when he got home that I wondered whether or not he should go to scouts with the kids or not. I went to bed for a while, uncomfortable and kind of grumpy. He chose not to go. At 8 pm I started feeling contractions and wondered if this was finally the night... by 8:30 we wondered if they were going to stop like every other time so far LOL. Tom got the younger kids in bed. By 9 I was telling Tom we should get ready to go. Tom got the older kids in bed, gave Michael the phone and had him sleep on the couch, and we left for the hospital around 9:15.

We got to the hospital about 9:25 or so. It took a few minutes to cross the parking lot as I needed to stop and wait through contractions. Same thing through the lobby and over to the elevators. They offered me a wheelchair but I declined. Then down the hall to Labor and Delivery... they saw me coming LOL. (we had called ahead and my doctor knew I was on the way, with my 9th child, with fast labors) I got into hospital garb and they took their time about checking me, sometime before 10 I guess they checked and found that I was complete... first time they checked...

My doctor got there and they decided they wanted an IV put in before we broke my water. So... three tries later and lots of bruises, no dice. They gave up at that point, at least... doctor broke my water, time to push, everything happened all at once and with one push Liberty Rose Valencic was born at 10:28... they were talking about 8 10 and I wasn't quiet clear yet and said oh, ok, that's how much Joseph weighed... duh, those were the Apgar scores LOL... but then they brought her back after weighing and she weighed.... tada... 8 lbs 10 oz rofl. 20 1/2 inches long, and beautiful.

So, less than an hour at the hospital and baby was born, pretty typical for us lol. I was happy to avoid the induction this time around, but glad we were there at the hospital long enough for the doctor to get there.

We called Michael at home to let him know baby was born so he could let anyone know who was still awake... Tom stayed long enough for them to get me and baby settled and he went home to share the news with anyone we hadn't called yet via email etc.

:) I have to say we are VERY glad she is finally here. There were those days I thought I would be pregnant forever.
Posted by Tom/Tabitha at 9:02 PM No comments: 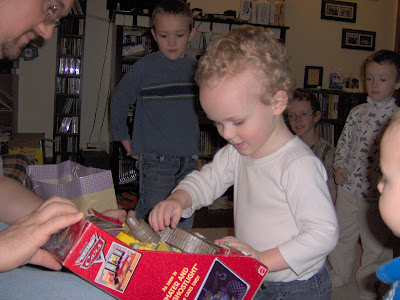 Timothy had a birthday :) He turned three on November 10th. He is our other early November birthday, meaning I was hoping to have him before Halloween, haha. He is growing so fast! Here he is opening a "Screaming Banshee" truck from Cars, the Pixar movie. He still loves cars and anything with wheels. 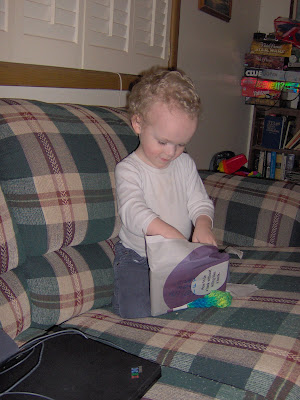 He got the hang of opening presents pretty quick. He loves being the center of attention, loved getting presents and being sung to, and having fun with everyone reminding him he was three. He learned how to show three on his fingers and said that he was three all day. He is just starting to talk much and he had a lot to say on his birthday. 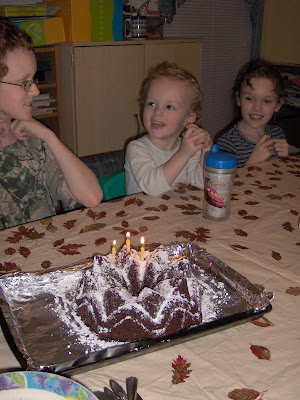 Here we are all singing "Happy Birthday" to Timothy and you can see his happy face. He loves his cake. He talked about it all day. Birthday cake pretty much covers it. 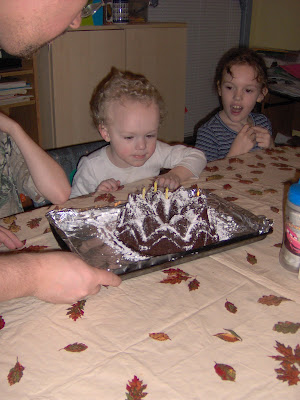 He knew what to do with those candles! He blew them right out. He didn't need even one little bit of help or a reminder of what to do. 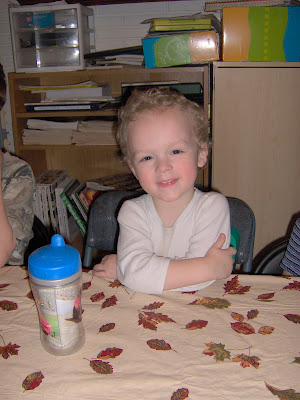 Happy birthday to our Timothy! Big boy! We love having Timothy in our family. It's rough some days with him not talking and able to tell us what is going on in his mind, but he tries hard to let us know what is going on with him. His favorite foods are pancakes, sandwiches and chocolate milk. And of course, birthday cake. He also loves bananas.

He loves his new baby sister and also plays an "echo" game with Christopher, usually when we'd like them to both be quiet like at bedtime or at church. He likes Winnie the Pooh still but really likes Benjamin's new Voltron dvd collection and then goes and makes a Voltron out of Duplo blocks.

Timothy is a joy to have around, usually ready to smile and give every one hugs.
Posted by Tom/Tabitha at 3:24 PM No comments:

Voltron! Yeah, guess it's making a comeback... even Timothy knows the catch phrases...

Anyway, Benjamin turned 11 on October 4th. He is now a Boy Scout. He earned his Arrow of Light and will be receiving it later this month, but he has already been working on Boy Scout rank activities. 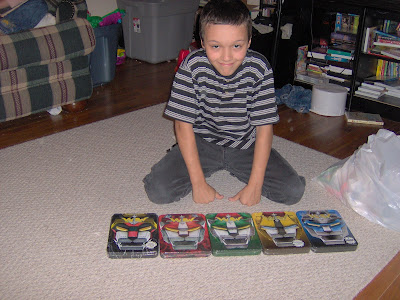 He is a great helper, especially with Timothy and Christopher as well as in the kitchen. He likes to cook and help with lunch. He does very well changing diapers too. He will be a great babysitter. 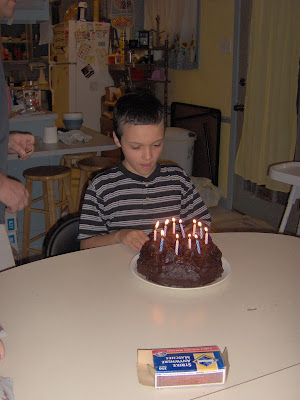 His favorite food is lasagna, which he chose for his birthday dinner. Again :) 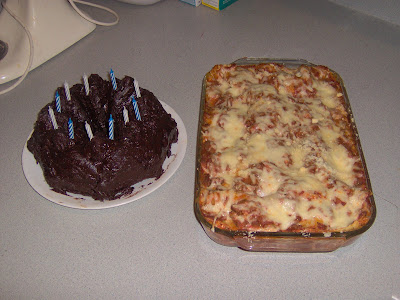 Some more birthday presents... Supersonic Saints and a movie about Anacondas... 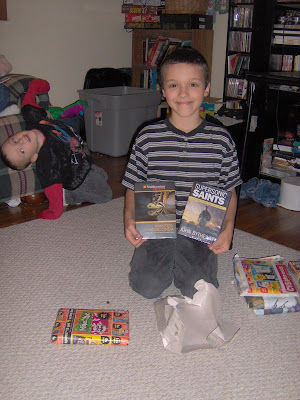 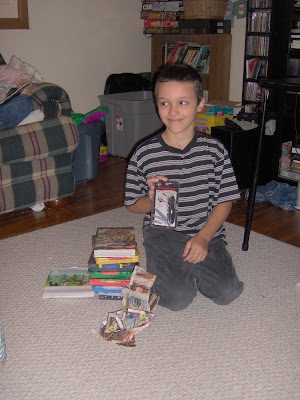 I'm a little behind... things have been crazy around here with labor for a month... but Liberty is finally here and I will write a blog post about that. This post is about Benjamin, though.

I can't believe he's already 11. 11 years ago he was born during General Conference, or at least right before the Sunday morning session. It was very cool being able to watch Conference in my hospital room. He went with Dad and Michael to Priesthood session this year.

Benjamin is our active boy, but also a voracious reader. He is the one who went to the ER on Dad's birthday with what we thought was a broken nose (which looks a lot better now, by the way) and also is reading his way through the library and our bookshelves. He is in 5th grade this year and starting some new concepts, which he is mostly doing great at.

His favorite place to be is outside on his bike or reading on the couch.

He loves helping, being with his family, legos, building, reading, and being outside. He is talented and learns more every day how to do what is right.

We are blessed to have him in our family.
Posted by Tom/Tabitha at 6:08 PM 1 comment: